A Short story about us

there lived a poor little kid named Johnny. He was a true blue Baltimorean who had a natural ability to turn a buck…

In the mid 1900’s, when John was growing up the country was fighting World War I and the economy was lean. He got through the hard time selling shoestrings and gadgets on the corner of Lexington and Park Avenues. John’s nickname was Whitey. Whitey was an incredible opportunist. As time marched on he found his way to the local carnivals. He set up a booth and created unique midway games. His games always looked easy to win and the prizes were better than anyone else’s. This always angered the more seasoned vendors and they would mumble under their breath. 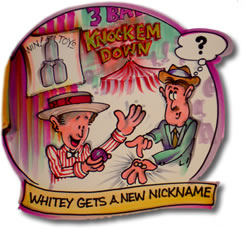 Occasionally when it got real busy, Whitey would return a nickel or dime extra change and word quickly spread that he couldn’t count change. When the merchants got word of this they chanted, “That dumb Polock is gonna loose his shirt this weekend.” When the weekend finally arrived and the players flooded his stand, the Polock suddenly learned to count! From that day on he was called “Johnny the Polock” and became well known and respected. He traveled with the show for a while until he began his family. It was time to settle down and set up a home base.
He opened a joint on the notorious “block” calling it “The Penny Arcade.” I 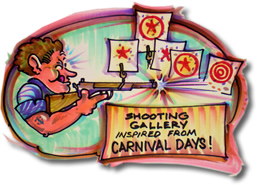 t featured the now tame hand crank peep show machine, two photo booths, three claw machines with naughty novelties, and the popular pinball machines with all the bells, lights, and buzzers. It wasn’t long before Johnny began to incorporate his carny background into the arcade. He created a shooting gallery with a B.B. rifle that challenged the players to “…step right up and shoot out the star.” Johnny the Polock was content with all the familiar noises, but his arcade was 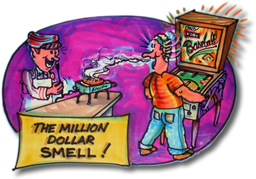 missing something that he couldn’t quite put his nose on. Then one magical late afternoon, he plugged in his frying pan to fix himself a hot dog. As the fragrance filled the room, it cast a spell on the pinball wizards. When Johnny looked up , his counter was filled with hungry faces. Alas, he figured what was missing in his arcade…the delicious aroma from carnival food. Needless to say Johnny sold his lunch and brought the rest of the pack in the next day. When he went through that pack in five minutes, he decided to make that his new game….hot dogs & lemonade. He decided to specialize in polish sausage so he could us his nickname. He created our “works sauce” and scored the polish with little cuts. Later those cuts became our logo and in 1921 a new sign was being hung at Polock Johnny’s.
"Polock Johnny is my name; Polish sausage is my game." 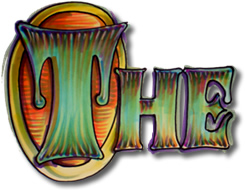 Business   was taking off and it wasn’t long before his son, John Jr. was drawn behind the counter. 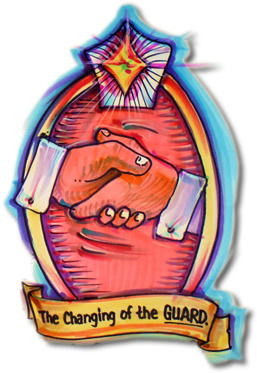 Johnny’s son, now in his early teens loved the excitement of the store but like most family businesses found it hard to work with his father. After several year of bickering, young John offered to pay his father’s salary for a year to stay away. Still the opportunist, Johnny the Polock accepted the challenge, confident he would be able to pick up the pieces if things didn’t work out. The year flew and the checks came like clockwork. Johnny Sr. was enjoying the steady income and freedom but was anxious to return to work.

When the year was up, his son was standing at the front door beaming with pride. John Jr. hand cleaned the place up, installed a new tile floor and countertop. Plus he bought some newer pinball machines. Johnny Sr. sold the business to his son on a gentleman’s handshake. As we entered the early sixties, J.F.K (John Fitzgerald Kennedy) becomes U.S.A’s  President.. J.F.K (John Francis Kafka) becomes P.J.’s president. John had already begun a family. He had three children then and was excited to take over the business.

met with bakeries to find the best hot dog roll for the steamer. He met with various meat manufacturers to develop an exclusive polish sausage. He hand chopped his onions in the morning and made the “works sauce” every other day. 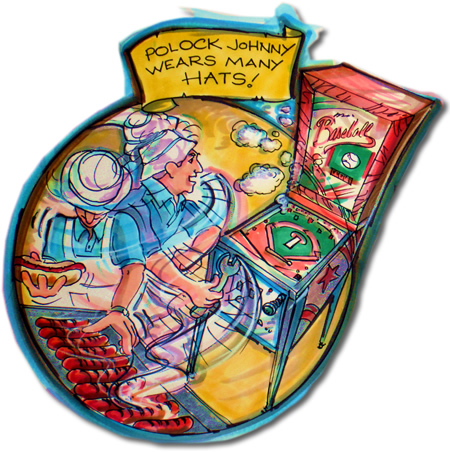 He wore his apron through the lunch rush, passionately working the grill. When the pinball machines broke down, he repaired them himself. He wore many hats throughout the day. John felt comfortable in his ability to provide for his loving wife and family. 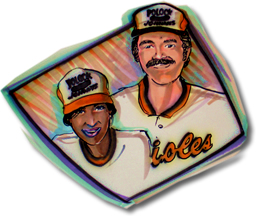 However in the mid sixties, J.F.K. was shot and we were still at war in Vietnam. The in 1968, Martin Luther King and Robert F. Kennedy were assassinated, and the country simply exploded in anger. John watched in horror as the riots came down Baltimore Street like wild locusts. All he

could do was pray for God’s mercy on his family business. Miraculously the destruction stopped between Calvert and Holliday Streets, less than two blocks from Polock Johnny’s. The next day, Johnny called Lexington Market to open a second location. He always wanted to support his family, which now had another mouth to feed. 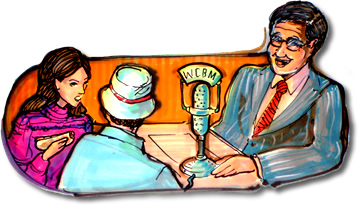 John was still dumbfounded at the power of his childlike prayer to protect his family business. John’s special brand of humor was often heard on the radio throughout the seventies with Tom Davis (WCBM) roaring hysterically. The favorite was the “taste test” when the second taste tester says…”Someone took a bite from this Polish…”and Polock Johnny replies, “Try the other end lady, this is radio,” and Tom Davis explodes with laughter. Polock Johnny took current events and advertising slogans and adapted it with his humor to the business. 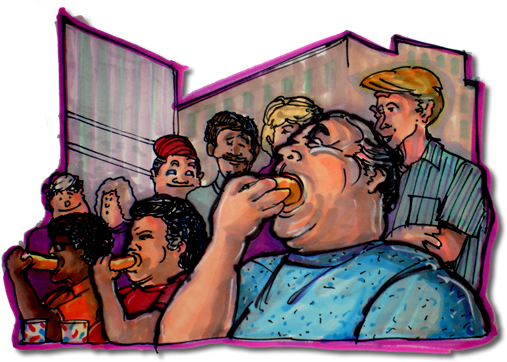 John had annual Polish Sausage eating contests that got media attention locally. In the mid 1970’s National Geographic carried the story and it went around the world. (That’s why we’re world famous.) Well, with all this media hoopla and the opening of the third store on Howard Street, Polock Johnny's was becoming a household name in Baltimore. John had been successful in all his endeavors. In the mid 1970’s John began receiving phone calls inquiring about franchise opportunities. (A chance for investors to buy the Polock Johnny concept and open a store of their own). 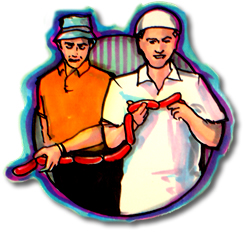 At the time it sounded like a win/win, so seemingly Polock Johnny’s were opening up everywhere in Baltimore. John decided to open a meat factory so he could

insure the quality of the polish sausage in his company stores and franchises. He hired a specialist from Germany, Pete Mueller, to create his sausage. They became good friends as did their wives. Pete was calm through all the problems they faced getting the new factory opened, then in developing the sausage. Pete was determined and focused, not easily disturbed by the delays and failures. One night, when John arrived home his wife was anxious to share with him the gospel of John 3:16, explaining that was why Pete’s family was so content with the challenges of life. They trusted Jesus in all things.

felt uneasy about this Jesus stuff…
he reasoned that he was a good person and listed all good things he did…but with all the justification, he couldn’t deny the emptiness he felt inside. 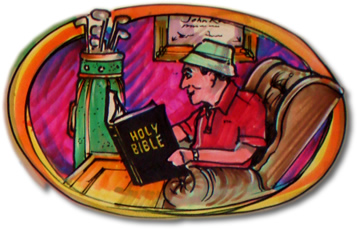 He saw his wife delivered from drinking, then cursing, and little by little the Lord was transforming his wife into a happier and more beautiful woman than the one he had married twenty-four years earlier. From being on the block for so long, John was very skeptical about religions, people and things. He felt bible thumpers were phony and he had a very hardened heart. Someone suggested he read the book, More Than a Carpenter by Josh McDowel. This helped him see the reality of the person of Jesus Christ. Overwhelmed he gave his life to Jesus through a pray like this:

“Lord I am a sinner in need of a Savior. I acknowledge your death for my sins, please come into my heart.” 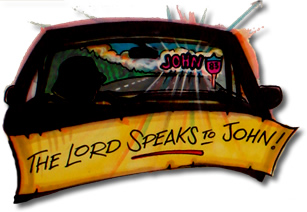 that point on, John began living his life putting Jesus first. While driving home from work on I-83 one day, he felt the presence of Jesus in his car. The Lord was telling him to remove the lottery machines from the stores. Confused John replied, “I donate money from the lottery profits, Lord.” Unimpressed God told him, “I don’t need that money and by the way, get rid of those cigarette machines too.” John did as he was told the next day and whenever someone asked why he took them out he said, “God told me to.” John used his time and money to serve Jesus and the people of Baltimore. He could not thank God enough for blessing him with good parents, a loving wife, four healthy children, and for answering his childlike prayer to have mercy on his family business in the sixties. He lived humbly and quietly serving Christ until he was called home to Heaven to live happily ever after. (That’s the only way a story can ever end – happy! The rest are fairy tales.) And this isn’t a fairy tale!